Winning at the Dogs 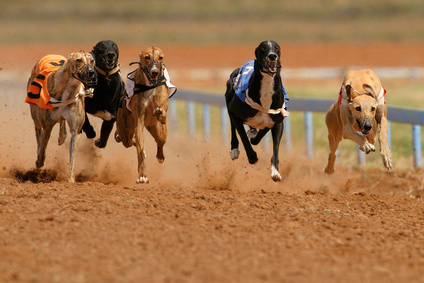 Today I want to share with you an angle for winning at the dogs.

The dog markets get stronger by the day and there is plenty of action to assess. That can make it all overwhelming, but on the other hand if you have one or two angles that you can quickly identify then you can get plenty of action for your systems.

The angle I want to talk about today is greyhound bitches and their seasons.

A greyhound bitch will come into season once or twice a year. They are not allowed to run when they are in season. But when they do come back they do not run to their previous form.

It takes some time before they are back to their best, with the key date being 16 weeks after their season.

So you regularly get a scenario where a bitch is running in say an A6 grade, then comes into season. After her break she returns and runs some qualifying trials and is not at her best and ends up in a grade A7 or A8.

She runs poorly in a few races and then week 16 arrives and she's feeling better.

Then we have an A6 winning dog running in an A8 race. Now they don't all win but if you catch them at the right time as long as they are capable of winning (IE they aren't one of those dogs that doesn't like to be in front) then you can follow them until they do and come out in front.

So to demonstrate I've tracked one down today.

Now it's not the perfect example, because Lisnakill Joanna has just won in an A8 and is today in an A7.

So she's already showed some improvement. But last summer she won an A5 in 28.67. That form would see her win this comfortably.

The Racing Post forecast a starting price of 11/4 and she runs in the 5.47 at Belle Vue. However well she does today this is a profitable strategy worth getting familiar with.

This image shows where to find the season date on the Racing Post card.

9 thoughts on “Winning at the Dogs”