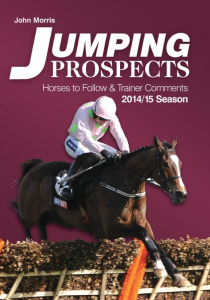 Today I'm looking at a book called Jumping Prospects that has been recommended to me.

It is written by racing stalwart John Morris.

The book is priced at £15 and was published late September and is aimed at those who like to follow trainers and also spot a few big priced winners that are under the radar.

There is comprehensive coverage of 21 Trainers along with comments on 475 of the horses in their care.

There are also ‘stable eyecatchers’ at the end of each interview to help you focus on those the author really likes.

This is the 23rd edition of the book and clearly offers something that is worthwhile to many.

Here's the edited highlights of the Amazon blurb…

John says: “Once again I have visited some of the major jumping stables along with other horses that might slip under the radar. The energy you pick up from my stable tour will fuel your betting tank for a long, long time!”

The Jumping Prospects book is guaranteed to uncover many winners during the autumn and winter jumps season.

When you purchase your copy of Jumping Prospects it will pay for YOUR outlay many times over, as it has the answers to future winners likely to appear during the jumps campaign.

You can obtain a copy by visiting https://dailypunt.com/jumpingprospects